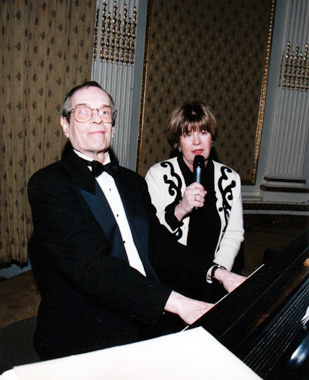 Yesterday I realized that it was time for me to check in with my musical theater “Yoda,” Paul Trueblood. I pressed his number on my iPhone and hoped for the best. That ominous “this number has been disconnected” message played and I went back to 411 to make sure I had the right number. 411 confirmed the number…I checked the Internet. Paul had died “quietly” in January 2012. That lunch at Jackson Hole, was it already a year ago? What had happened?

After spending time searching the Internet, page after page, I found nothing more than the original announcement. This at least shared his background and provided a glittering list of musical theater stars with whom he had worked. These were giants like Comden and Green, Alan Jay Lerner, Cy Coleman, and many others. Most of these people were dead too now, but Paul also had many young writers and performers coming to him. Had I missed the article? As I read more newspapers per day than is good for anyone, I concluded there had been no article. That evening I happened to be at the York Theatre where a fine new production of Closer than Ever was in previews, and asked Jim Morgan, their longtime artistic director, if he knew anything. He had heard from someone that Paul had died, but this was just in April. He didn’t know anything.

Something must be said about Paul Trueblood, quiet and unassuming but with a creative talent and knowledge outsizing anyone else around, from the time he came to New York via the legendary theater program at Northwestern in the late 1950’s until today. He had become the “go to” person for cabaret, but I think that is because he’d spent so many years doing musicals and working with the best writers of the theater. I was doing cabaret when I met him, but as I moved into writing for musical theater, I quickly recognized a person with huge ability and talent, something that was deeper and fuller than I’d expected or even understood then.

I’m sure that the generations of singers who worked with him would agree with me when I say that he was the accompanist from heaven, and I’m not sure “accompanist” is the right word for he took the lead in all the best ways. He saw your talent and skill or lack of it right away and yes, if he thought you needed help, he would let you know, graciously:

“You’ve got a high range you’re not using. Here’s a number (and he would go to his ever ready book of contacts). Go and see what’s there, you’re losing time.”

“This act needs a director, call Margery, she can help you put this together, then come back to me.” or

“You don’t understand the force of harmonic change within a phrase. Listen to this…” (and he would go through a series of unusually constructed progressions).

It was strange to learn that when he thought you were strong enough, he’d back away and send you off to find others. In the early stages of development of my eventually produced musical, he was very present and even music-directed a workshop, playing rehearsals and performances, working privately with the actors at below minimum cost. As this musical matured, he declined the role of music director and complimented whomever the theater had recommended. I came to understand that he was the one who made the decision about whether he was truly needed and if he thought someone else could do it as well, he used his time in other ways with you.

He loved playing through newly composed songs and scenes, his comments were honest, intuitive and very detailed. Remarkably, he understood where you were going even when it was not all on the page, he could decipher your shorthand and scribbles—while advising politely that more needs to be “on the page” –if you’re to be taken seriously. If you wanted to record a new song or make a demo, he knew whom to call. Those performers would come in and be remarkable, and he knew the right recording studio and engineer. It was all so easy with Paul.

I felt like I had to learn and study, that I needed to know so much more to get the best from my time with him, and so I did that. He never said a word about my growth but assumed it and took me into the material in ever expanded and interesting ways. I became increasingly more careful in finishing compositions, so that what I took to him would be worth his time. Of course, what I thought of as “finished’ was usually only just beginning to come alive. Every now and then he would say…” leave this alone, the melody is memorable. Don’t crowd it with variation and excessive accompaniment.”

His wit was legend and you never knew what tidbit he would share as you worked your hours with him. He knew the understudies who should have become stars, and the songs that should have been hits. He was there for Bob Fosse’s first show and rehearsed Gwen Verdon in Sweet Charity. He could mimic Betty Comden’s throaty, smokers’ voice in a morning call: “Pa–ul, you won’t believe this but we’ve been asked to perform this evening. What do we have? I hope you’re available…”

I became aware that although Paul was expensive by the hour, he would take other work at very different rates. As a fundraiser I managed a lot of events around town and invited him to come play piano, surprised when he always agreed to do it. He would play for as long as was needed, no time limits. His fee was always $500 and I couldn’t pay him more, he wouldn’t take it. One event we did together was an East Hampton Guild Hall dinner at the Plaza, that year honoring Cy Coleman. I sang “I’m A Brass Band” at his side at the piano and he had convinced Comden and Green to perform for Cy Coleman, with Guild Hall Board member Peter Stone telling jokes as the MC. It was an evening to remember.

His time in theater is long past and those writers and performers he knew then, mostly gone. There will be no legions of fans waiting in line to attend his memorial in a Broadway theatre some producer has rented for the afternoon. But there are a lot of us, cabaret performers and producers, composers, rising theater stars and so many good friends who will remember him in our hearts, grateful for his attention and respect.

If it is true that each of us is unique, then let us acknowledge that here was a man of the musical theatre, more truly unique than any of us ever imagined.